By Jackson Herring's request. This thread is from 4 days ago, before it was released that the police believe it to be a murder-suicide. There have apparently been two threads since, but both were pulled and the Admin reasons is stated as "JT Ready is not welcome here."

Summary: "Five people were shot to death, including a toddler, at a house in the Phoenix suburb of Gilbert on Wednesday, and a white supremacist border militiaman apparently was among them."


There were three or four different stories in the AZ Repug this morning. In two to them they mention that this guy was running for Sheriff in Pinal County but conveniently forget to say “Running as a Democrap”. All through out the articles they bash his connections to the GOP and his connection to recalled AZ Senate President Russell Pearce.Bias in the Phoenix "News" - not at all. The AZ repug worked very hard to get rid of Pearce and continue to bash Sheriff Joe every chance they get. I honestly do not know how the GOP can win anywhere in a large urban area with this type of "news" coverage.


******white****** supremacist border militiaman.CNN reported him as a Neo-Nazi.MSM usual work if your skin is white your nothing but a hater of mankind.Dog eaters agree.


Interesting how the phrase was coined “White Supremacist” to neutralize one group and benefit others. That’s a typical divisive tact just as “conspiracy freak” is used by those who want to neutralize the opinions of others. In addition to white supremacist the libs, media, SPLC, ADL etc also aided in the creation of the term “hate crimes”, where crimes against certain ethnic groups are non-important and are mundane crimes and not hate crimes, but others get special attention.
Every time I see the use of “white supremacist” against those who oppose illegals it makes me ask why and what qualifies its use? They simply oppose those who are in our country illegally stealing our rights and treasury to the benefit of some politicians and businesses.


Although he's being reported as a Neo Nazi and White Supremist, this photo indicates otherwise: 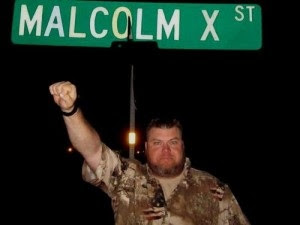 In it, he's giving the Black Power salute in front of a sign honoring Malcolm X.
Seems more like a black supremicist, to me!

He was nothing but a racist mass-murdering thug and a coward.

NAZI - National Socialist German Workers' Party (or NSDAP)
And he wondered why he didn't make it as a Republican candidate.


Too much has become a media set-up to neutralize any movement against illegal immigration, and to call those who oppose it racists and supremacists. If this dude ran around in front of the media in a Nazi uniform then he was part of the hype and set-up. The SPLC and ADL are always there in the thick of it, just as your link in post 7 mentioned, wanting both our First and Second Amendments ended, our borders open and hate crimes available to be charged against all except a few special ones.

“No mention that he’s also a Leftist Occutard as well...”