Caption This: Willow Smith (daughter of Will) in the seat of Chairman John Kerry

Here is a picture of a kid fooling around on a trip to the Senate: 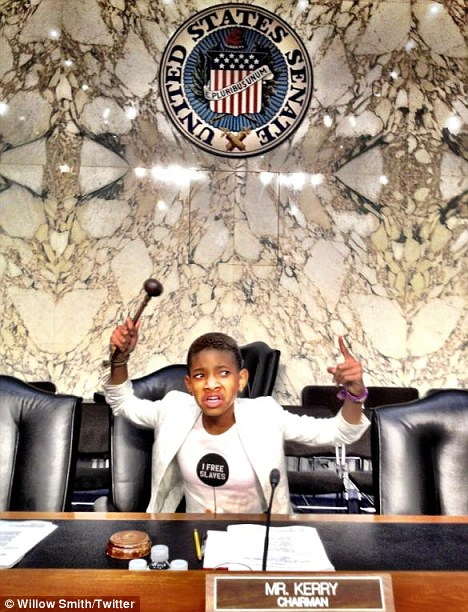 Surely the Freepers won't say anything offensive about her!


I really just put this here because I think it is outrageous. I didn’t know people testifying before Congress could get up and take photos like this

"She is quite possibly one of the ugliest kids I have ever seen. She is androgynous at best "

...or at least tied with Chelsea.

WHAT THE HECK is wrong with Democrats that they allow behavior such as this in the Senate? She should be banned for life from ever entering the Capitol again.


Somebody put a hook in that mouth.

Those celebs are raising their kids to be gay. So sad for the children.


"Will Smith visited wounded soldiers in the hospital and when he saw the housing for visiting family members, he wrote out a check for the entire cost of building another house."

I think you are thinking about Denzel Washington.

I wish she would act like a little girl. Also grow some hair. Not the kind Halle Berry has which looks like a head full of bumblebees.

Her shirt says: "I Free Slaves." What the hell?
And like others here, my first thought was "That's a Girl?" Sad that she looks so much like her ugly father. If she's not gay, then he'll have to pay some guy big bucks to marry her one day.


I think her mom is full of herself .She’s a ghetto girl from Baltimore.

Will Smith is the catch in that relationship